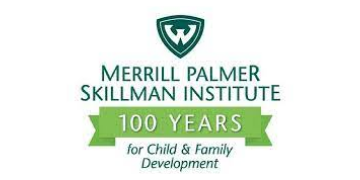 We are seeking a senior behavioral and social science or public health scholar in the field of Child and Family Development for the position of Director of the Merrill Palmer Skillman Institute for Child & Family Development (MPSI). MPSI is an independent research institute and the Director reports to the Vice President for Research. The focus of MPSI's research is on child development in the urban context with an emphasis on African American children and families. The Director position would also carry with it a tenured Associate or Full Professor in the appropriate department at Wayne State University.

Applications will be considered until the position is filled.

About the Merrill Palmer Skillman Institute and the Director position

The Merrill Palmer Skillman Institute (MPSI), founded in 1920, recently celebrated a century of nursery schools in the nation to bringing renowned faculty and students to its campus, MPSI has always sought to improve the development, health and well-being of infants, children, youth, young adults, and their families, through research, education, outreach, and the MPSI Early Childhood Center: with 12 faculty, $2.5M in annual research funding, 14 pre-doctoral trainees, and yearly outreach to over two thousand people in community programs. A decade of accelerated growth and accomplishment positions Wayne State University to hire the next Director for the MPSI, launching a new century of achievement and impact. The MPSI website can be found at https://mpsi.wayne.edu/about and its 2017-2022 strategic plan at: https://mpsi.wayne.edu/about/mpsi_2017-2022_strategic_plan.pdf. 2020 Biannual Report: https://mpsi.wayne.edu/about/mpsi-report

Research at MPSI focuses on urban populations who endure community, environmental, biomedical, psychosocial, systemic, and other stressors influenced by the sociocultural context, including but not limited to structural inequality. This work is translated into practice to improve the lives of urban youth and their families. Faculty promote interdisciplinary research in developmental science across Wayne State University – bridging schools, departments, disciplines, and individuals – to provide challenging undergraduate, graduate, and post-doctoral research training in pre-natal, child, adolescent, emerging adulthood, and family development. Faculty, staff, and students also engage the community through public outreach, professional development, scholarship, and educational activities for the common good. The Director of MPSI will be a tenured Associate of Full Professor in the appropriate department.

Wayne State University is a premier, public, urban research university located in the heart of Detroit. The 200-acre traditional and high-tech campus is in the heart of Midtown, offering unparalleled access to cultural experiences, community involvement, and corporate career opportunities. Wayne State University is the third largest institution of higher learning in Michigan and the most diverse campus in the state with nearly 27,000 students from every U.S. state and nearly 80 countries. Wayne State is home to 13 colleges offering over 350 degree programs. Additional information about the university can be found at: wayne.edu.

The Director will report to the Vice President for Research and will have the following duties:

Qualifications for the Position

Please submit your letter of application, curriculum vitae, and contact information of four professional references to jobs.wayne.edu, posting #045400. The review of applications will remain open until the position is filled. For additional information about this opportunity or questions about the application process, please contact Jeffrey Kentor, Search Committee Chair, at: jeffrey.kentor@wayne.edu.

The Affirmative Action Plans for Minority/Female and Veterans and Individuals with Disabilities is available in their entirety on the OEO website.

Wayne State University is an Affirmative Action/Equal Employment Opportunity employer, which complies with all applicable federal and state laws regarding nondiscrimination and affirmative action. Wayne State University is committed to a policy of nondiscrimination and equal opportunity for all persons regardless of race, sex, color, religion, national origin, age, disability or veteran status, or any other characteristic protected by applicable law.

EEO is the Law